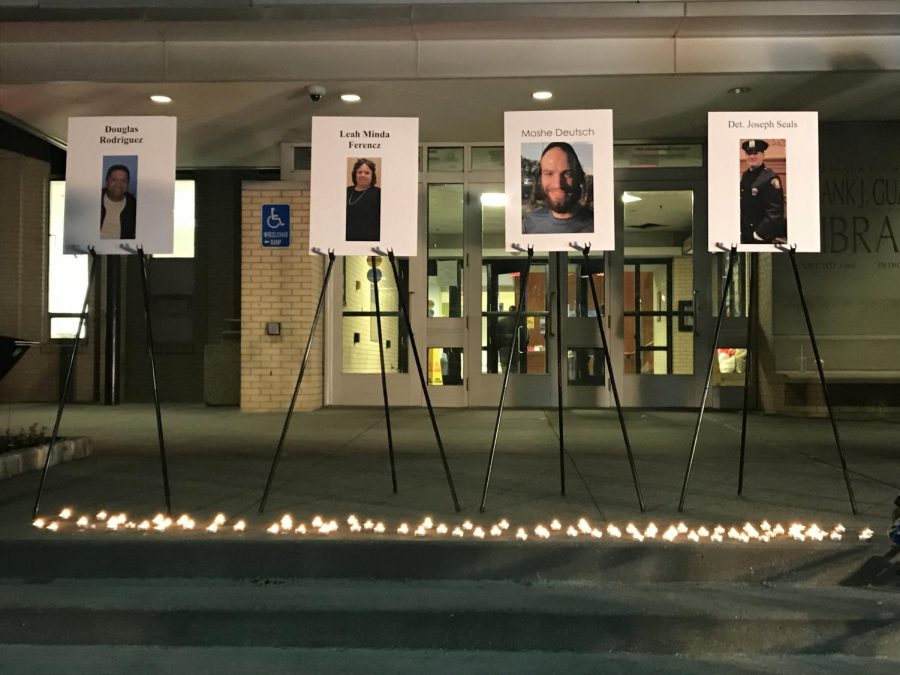 Candles were lit to remember the victims who were killed.

This past Thursday evening a candlelight vigil was held at NJCU for the victims who lost their lives in the December 10th shooting at a nearby kosher supermarket. Victims: Detective Joseph Seals, who worked for the Jersey City Police Department for 15 years, Mindel Ferencz (who ran the store with her husband), Miguel Douglas Rodriguez, an employee originally from Ecuador, and Moshe Deutch, a rabbinical student from Brooklyn were all killed.

The Dec. 12 vigil was held in front of the Congressman Frank J. Guarini Library. Students, staff, and faculty were attendance to pay their respects to the victims who were killed by two gunmen in an act of hate.

The brother-in law of Mindel Ferencz and wife of Miguel Douglas Rodriguez were also in attendance. Marta Rodriguez said that she forgives the two assailants for killing her husband. She said, “I loved a man who taught me how to love even more, and only with the peace of God did I have the ability to forgive somebody that ripped away the love of my life.”

Rabbi Moshe Schapiro and Pastor Shyrone Richardson talked about spreading love and respect within the community.

Safa Mostafa a student at NJCU said that hate is not welcomed in Jersey City. She also thanked Public Safety for taking immediate action to make sure people on campus were indoors and safe.

As candles were lit, Jermaine Robinson said everyone should spread love. He said, “We all have candles right now in our hands, and I want us to hold the candles up to our hearts and I just want us to think about the love that burns inside of our hearts.”