Throughout the past few months, some students living at NJCU’s West Campus Village (WCV) dorms have complained about a lack of heat and hot water.

West Campus Village is NJCU’s largest and most expensive dormitory, consisting of 427 beds as well as a music room, fitness center, conference room, and a game room.

Opened in the Fall 2016 semester, the building cost $50 million, with a construction period of roughly a year.

Jasmine Shaw, a senior at WCV, said that there was no heat or hot water on November 14, 2019. She said on December 10, there was no hot water and the boilers were possibly down.

In response to these problems last semester (fall 2019), Jodi Bailey, associate vice president for Student Affairs, said in an email interview on January 14, 2020, “For the current situation, unfortunately, both of our boilers have broken at two different points in time where parts need to be ordered. There has been one boiler operating at a time but I was told that the new parts were due earlier this month and were being worked on.”

Marcella Newkirk, a freshman, who dorms at WCV says, “I had a heat problem last semester [Fall 2019] but it was fixed.”

In the first Student Government Association (SGA) meeting of 2020, there were a few issues brought up about the WCV dorm. Some students 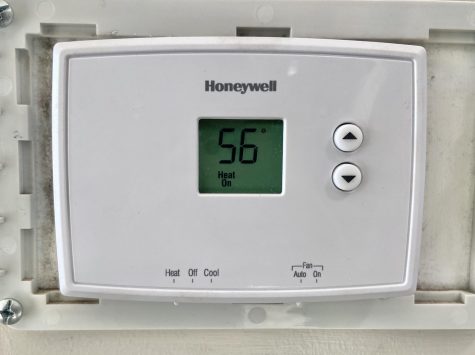 The temperature inside the West Campus dormitory. Photo by Haresh Oudhnarine

expressed that the building was usually too cold. Another issue brought up was that sometimes the temperatures says 50 degrees. However, when a student tries to turn the temperature up, it goes back to 50 degrees.

Issues with hot water and heating became prevalent during the fall semester of 2019. Two buildings on the main campus, Karnoutsos Hall and Fries Hall, also experienced problems with heating during this time frame last semester.

Jennifer Luciano, assistant dean of Residence Life and Student Engagement, said in a November interview that the issues have not been ongoing as long as it may feel for the students. “We have two boilers in the building and that is what sustains the heat throughout the building. Right now we have one boiler that is down so they’re working on repairing that. What that means is that there is one boiler that is working but it’s a lot on the load. We have heat… but the water may not always be hot throughout the day.”

Andre Pearson, associate vice president of Building Services, further clarifies, “There are two boilers and one has been repaired and functioning properly for some time now. As far as I know, there have not been any recent hot water issues. The repair of the second boiler is scheduled to be completed this week [January 12 – January 18, 2020] and will provide redundancy in case one boiler fails.”

Alexandra Kaisto, an exchange student said, “While the water is running, it usually takes a long time for it to become hot.” Kaisto’s heating in her room is sufficient.

Roslyn-Eleanor Abotsi, a freshman who recently moved into WCV for the spring semester, said the water has not been hot to her liking. She said,“The water never gets HOT hot.” Abotsi explains that the water feels like it has been running for a while at the end of a long shower and cannot get any hotter; except it is during the entire shower that it feels that way.

Newkirk said there have still been hot water issues at the start of the spring semester. She said, “I did not have hot water last night or this morning [from January 21 to January 22.]”

Shaw confirms there was no heat on January 27 into the morning of January 28. In addition, she said that there was a power outage at WCV during the night of January 25.

Hot water problems arose back in 2016 when the building was first opened. An email was sent out on February 6, 2017, to the dorming students from Bailey, who at the time was assistant dean of Residence Life and Student Engagement. The email talks about hot water and the university’s solution. It reads in part, “The University was made aware of student concerns regarding intermittent hot water within the West Campus Village residence hall in late fall of 2016. These issues were addressed by the University’s facilities team who performed water temperature checks.  In some instances, the water temperature was found to be approximately 80 degrees (NJCU sets its hot water temperature at approximately 115 degrees).”

In the email, Bailey said, “Beginning this evening WCV students have the option to shower in CO-OP and beginning tomorrow morning you are welcome to also shower in the Athletic Center.”

This presented a significant inconvenience for dorming students, having to travel to a completely separate building to take a shower in addition to its occurrence during a peak winter month. Equally as important, the dorming hall only opened roughly six months prior to this incident.

Bailey said at the time that “fluctuating hot water in the building” was a result of a faulty valve. The issues in 2017 took a while to fix but were eventually resolved.

In an email interview, alumna Kristen Hazzard said she experienced lack of heat and hot water while she attended NJCU. “I did have a problem with both heat and hot water. When the hot water issue happened, I was a junior (2017-18) and as for the heat issue, that was occurring on and off for the 3 years that I was there.”

Jodi Bailey explained in an email interview on January 14, 2020, that the issues from 2017 are not related to issues from 2019. She said, “In 2017, there were issues with the water and how it was distributed throughout the building. The facilities staff had to bring in a specialist to install sensors on the pipes in order to push the hot water to places that it was not circulating to.”

On January 22, Jennifer Luciano confirmed that both of the boilers in WCV were completely repaired and that heating issues throughout the building have been mostly resolved. She did note that the heating in the lobby area was still having issues, with the thermometer reading 56 degrees Fahrenheit.

Letter to the Editor

To Whom It May Concern,

Throughout the Fall 2019 semester at West Campus Village students have not had proper heating, hot water, and now wifi that goes in and out. As you would imagine our frustration, functioning and carrying on about our day is extremely difficult if we cannot simply shower or sleep with any proper heating. Function in a facility with no heat and hot water was extremely difficult in the winter and as students, having basic necessities is something that we should not have to worry about when we pay the price of West Campus Dorms.

Students pay enormous amounts of money from $6,271 to $7,871 per semester which adds up to around $15,742 per year. Regardless of having one heater fixed, having proper planning and enough supplies to provide healthy environments is something crucial that students should be able to rely on. This is also not the first time within the past couple of years this has happened.

By sending this message students are asking that something is to be done as well as spread awareness of the situation at the dorms. The new dorms are a nice expansion of NJCU and we support it, however, when issues such as this arise, we worry. While we are grateful for all of the opportunities NJCU has provided for us, students ask that NJCU take accountability for their actions and that they fix and resolve these issues that can be harmful to the student’s physical health and well being. Students look to the faculty and staff to provide a meaningful education and a safe place to learn and grow, and they ask that you speak your mind and support their voice.

We want to grow together as a community.

Thank you for your time.