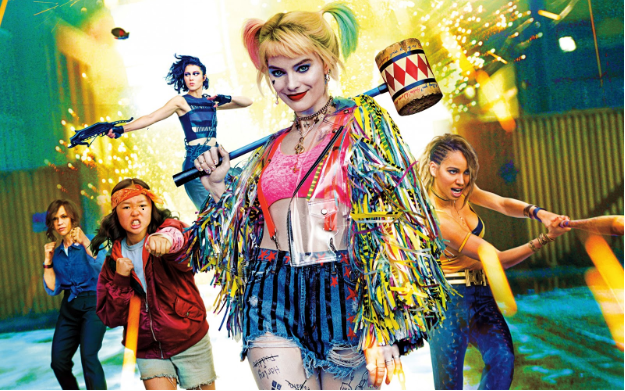 After Suicide Squad’s release in 2016, it was evident that Harley Quinn had become a fan favorite for all. As a cult favorite, a wide majority of people dressed up as her for Halloween, and many wanted to know in greater depth much more about her story. Originally a doctor who studied patients at Gotham City’s Asylum in Arkham, Harley fell in love with a patient and devoted her life to becoming the perfect servant for him. That patient was The Joker. As it turns out, The Joker was only using Harley after he got what he wanted out of her. Harley was the one who did all the work, yet Joker was the one who claimed all the credit without mention of her.

Birds of Prey (and the Fantabulous Emancipation of One Harley Quinn) is the story of how Harley set out to be her own woman in search of her true passion in the world. Portrayed by Margot Robbie, she brings Harley to life with her charming attitude and capability to understand that she does not need a man to protect her from danger. The movie has Harley taking on the danger of people she griefed throughout the years of her and The Joker’s mischievous reign. Fortunately enough for Harley, she has her own squad this time to help her out of sticky situations. With the help of a Gotham City detective Rosa Montoya; Black Canary, a singer for the main villain, Roman Sionis’, club; and Huntress, who is the daughter of the Bertinelli’s who were a Gotham city mafia family, they must all protect themselves from the dangers Gotham has to offer. While they were all not working together in the beginning, circumstances forced them to unite in order to save their own skins as well as Cassandra Cain, a teenager who pickpockets on the Gotham streets to make a living. She ends up picking the wrong pocket which in turn creates a race between all of Gotham City’s bounty hunters to try to get to Cassandra Cain and her “stash” first.

Robbie, as Quinn, narrates everyone’s story in an effort to familiarize the audience with her squad before they play their parts. Detective Montoya is played by veteran actress Rosie Perez who injects her own Brooklyn, Latina spiciness into the character. Jurnee Smollett-Bell, as Black Canary, created a bad-ass, no-nonsense character with her trademark “Canary Cry” that as Harley says, “is the voice that kills”. Huntress, portrayed by Mary Elizabeth Winstead, is known as the “Crossbow Killer” to many, but adamantly demands she be named Huntress. Coincidentally the people who are now after Quinn are the same people that murdered Huntress’ family. To round out Harley’s squad, Cassandra Cain is played by breakout star, 13-year-old Ella J. Basco, who depicts the foster-care troubled teen as a street-smart kid who still is very vulnerable. Harley is a role model to Cain and her protection was what Cain needed to survive. This movie was an excellent addition to the DC Universe lore. It shows that Harley Quinn can make it on her own and have her own all-female squad to back her up without needing anything from The Joker. Being that it is the first female DC lead movie since Wonder Woman in 2017, it does a fantastic job empowering women and giving women once again the spotlight in a DC movie. What’s in store next for Harley Quinn and her squad remains to be seen, but based on Birds of Prey, the viewer can be pretty confident in knowing that Harley Quinn will be just fine on her own.