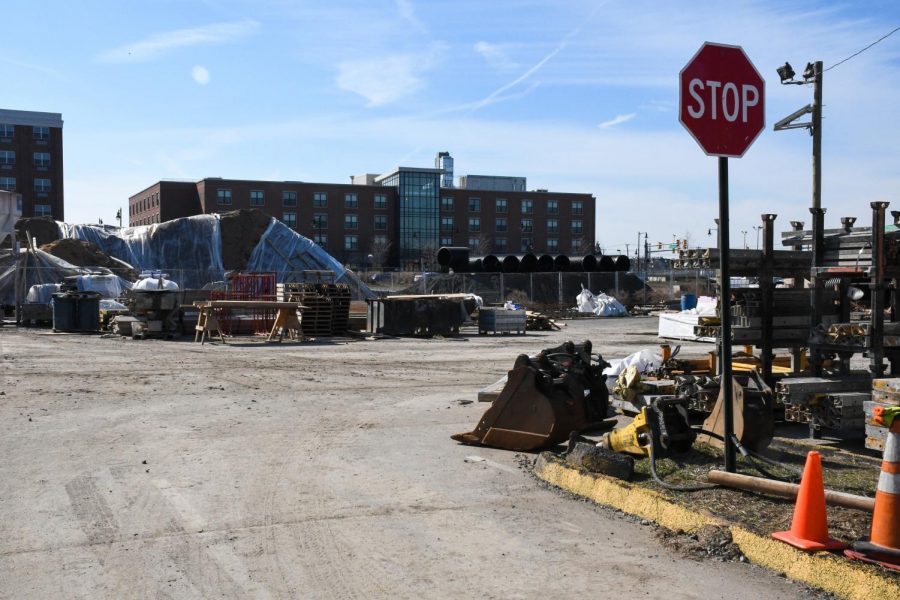 The site of where Lot 3 was located before removed for the upcoming Performing Arts Center. Photo by David Wilson.

The development at West Campus means big changes for parking which will become limited due to new construction at NJCU. For example, at the beginning of spring 2020 semester, Lot 3 (which was for faculty, and staff)  was no longer available for parking.

Parking has been an issue at the university for many years. Students have always been concerned with commuting to campus and being able to arrive on time for classes. Students who drive or use services such as Uber are often stuck in traffic while commuting.

When Yamil Oliver, a Media Arts major, was asked about his daily commute as a driver he said, “I am late almost every day to class. The traffic is awful and there is never anywhere to park. Sometimes, I’ll leave an hour or more before my classes start and still arrive late. I only really live 25 minutes away.”

Sherrie Madia, associate vice president of Marketing and Communications said, “Lot 6 will close at the end of the spring term. Lot 7 will remain open.”

Lot 6 is located across the current construction on the site where the shuttle stops to drop and pick up students, faculty and staff. Lot 7 is near the West Campus Village dorm.

Late in the Fall 2019 semester, Madia was asked about future parking plans as construction proceeds. “Students will use Lots 7 and 1. The university is currently exploring alternate/additional locations.”

Lot 1 is under Gilligan Student Union Building and has 396 parking spaces.

Since Lot 3 has been removed, Ronald Hurley, associate vice president for the Department of Public Safety, said in an email the space for Lot 3 is going to be used for “Another market rate apt, with retail space.” (Based on NJCU’s plans, this is most likely Rivet II. See map on page 5).

Regarding Lot 6, Hurley said it “will be the site of the new ShopRite.” He continued, “We are looking at additional space at Raymour & Flanigan and the NJ Transit light rail lot.”

In a December 12 email to the NJCU community, the administration said more parking spaces will also be  available on West Side Campus, and other transportation options will be given.

The email said: “86 parking spaces, dedicated for faculty and staff, will be added along Gothic Knights Way (40) and University Place Boulevard (46).” These are newly named streets on West Campus.

Mayor Steven Fulp and the City Council partnered with a new transportation service called “Via.” Via is another ridesharing app like Uber and Lyft where students and faculty can use to get to campus since NJCU will be supporting the service.

Via is now available on weekdays from 6am-10pm. It offers multi-passenger ride-sharing service throughout Jersey City starting at $2.

The Hudson-Bergen Light Rail station at West Side is expected to be back operating in March 2020.