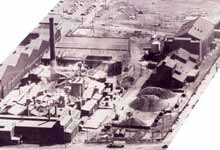 Until the mid-1950s, NJCU’s West Campus was home to chemical plants that created chromium used on new cars, home-furnishings and contemporary architecture. Although chromium brought shiny silver chrome into 1950s pop culture, it also brought blight to Jersey City. Those chemical plants were burying their chromium waste on company soil.

A carcinogen to humans and toxic to the environment, chromium still lurks in the soils of many Hudson County industrial sites. According to a U.S. National Library of Medicine report in 2012, several Jersey City chemical plants were the source of chromium and chromium waste, and over the decades, they distributed chromium waste as landfill throughout Hudson County.

In the 1990s, NJCU purchased the 21-acre West Campus property with chromium contaminated soil. Years later, the property’s previous owner, Honeywell International Inc. and NJCU were taken to court by the Hackensack Riverkeeper to address contaminated groundwater running into the Hackensack River. Honeywell was court-ordered to remediate, excavate and cap the soil by U.S. District Court Judge Dennis Kavanagh. Honeywell spent $30 million to do the job.

Attorney Alicia Alcorn represented the Hackensack Riverkeeper in its lawsuit against Honeywell and NJCU. According to Alcorn, Justice Kavanagh’s decree ordered Honeywell to remediate the chromium-contaminated soil and install a cap to stop contaminated groundwater from seeping into the Hackensack River. The New Jersey Department of Environmental Protection (NJDEP) oversees the site’s remediation, and issues reports on the soil and groundwater status to the Hackensack Riverkeeper and NJCU, Alcorn says. NJDEP also reports all financial matters to former New Jersey Senator Robert Torricelli who Justice Kavanagh named Special Master of the new construction at Bayfront–an area located on the opposite side of Route 440 from the campus and a development project owned by the city also contaminated with chromium.

“In terms of the NJCU West Campus, the Special Master oversees the financial assurances that have been established by Honeywell to ensure the ongoing monitoring, maintenance, and continuation of the groundwater remedies that have been put in place,” Alcorn says. “The rest remains under the supervision of the Federal Court pursuant to the consent decree.”

NJDEP spokesman Larry Hajnes says Honeywell completed a $30 million remediation of the site in compliance with the consent decree. The remediation included the excavation of 65,000 tons of contaminated soil  replaced with clean fill in areas designated for residential use.

An engineered cap was constructed in the areas designated for commercial re-use, Hajnes says. In addition, an underground barrier wall and pumping system were constructed along the southern and western portions of the site to prevent the spread of contaminated groundwater.

“These remedies comply with DEP regulatory requirements for protection of public health and the environment,” Hajnes says. “Honeywell, through permits issued by the DEP, must routinely monitor groundwater and inspect and maintain the cap. Regular reports are filed with the DEP. The cap is constructed of multiple barriers of synthetic and natural materials to prevent exposure. If any construction were to compromise the integrity of the cap, Honeywell must notify the DEP and take steps to address the compromise.”