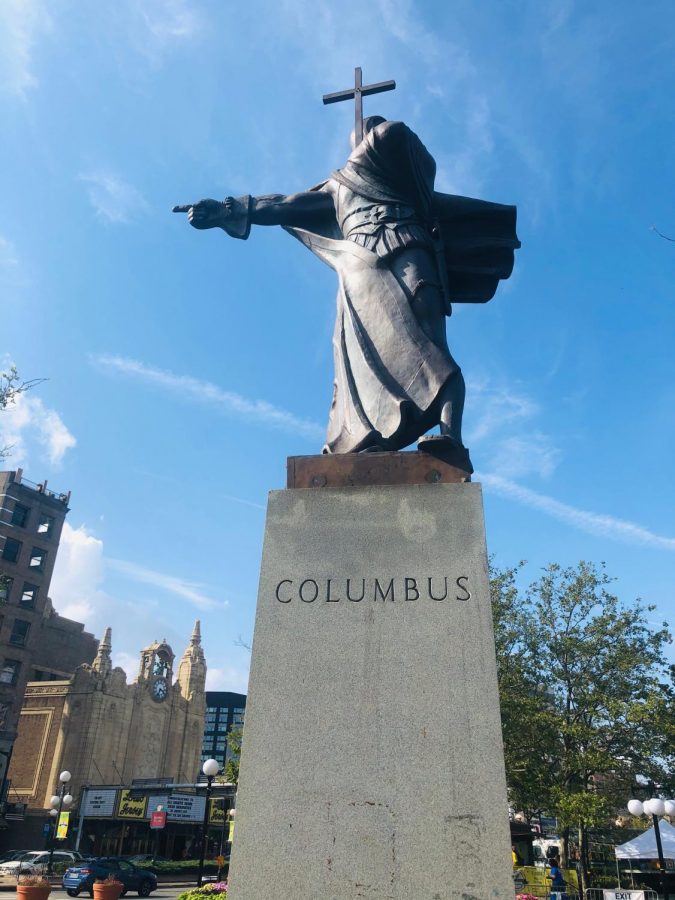 Many citizens have protested, spoke out, and even rioted in response to the onslaught of countless young black lives lost at the hands of racist police. One of the acts of righteousness has been taking down monuments of slave owners in various cities. While some argue that this is un-American and a defacement of the country’s landmarks, I say that the presence of these statues is a slap in the face to the people that built this country to begin with. The Black Lives Matter movement is a collective consciousness taking place in demanding the rights being violated by systemic racism in America for over 400 years. That is plenty of time to let a wound fester under the tyrannical conditions of white supremacy.

Many of the statues that have been taken down were of Christopher Columbus. In West Orange and Camden, New Jersey there have been statues taken down and signs that say “MURDER” and “THIS IS STOLEN LAND.” He is in fact a thief and the one responsible for the genocide of the indigenous people of the Caribbean Taino. This man has been characterized in children’s books as the founder of America, when that could not be further than the truth. This is a gross misrepresentation of the reality that must be corrected for future generations.

In New York City Mayor, Bill de Blasio has ordered the removal of Theodore Roosevelt’s statue after the American Museum of Natural History asked. Mayor de Blasio stated, “It explicitly depicts Black and Indigenous people as subjugated and racially inferior.” It has become clear to some that these statues are symbolic of a detrimental system put in place to keep disenfranchised people down. The time for change and progression is now and we must start in our own backyard. Journal Square in the heart of Jersey City there is a statue of Christopher Columbus, and with all the hustle and bustle going on it can be easily overlooked. One person that has noticed the statue right in the middle of the square is a farmer’s market vendor who gave his name only as Sam. “I don’t have a strong opinion; I see it as a part of history,” he said.

NJCU student Zady Guzman says that keeping the monuments in public display sends the wrong message. Guzman states,” I do not think we should glorify the tyrant he really was. He was not the person that discovered America. I personally think it is a good thing to take down the statues. Good riddance!” Another prominent figure found in Journal Square is that of Peter Stuyvesant. Stuyvesant was a Dutch Director General of New Netherlands in 1647 and one of the largest slave owners that perpetuated the Atlantic slave trade. There are high schools, streets, and neighborhoods named after Stuyvesant, and his sculpture is displayed right outside Hudson County Community College.

Hofstra University was compelled to rename one of their halls after two teenage Dutch resistance fighters from WWII instead of after Peter Stuyvesant. NJCU history professor Christopher Cody said, “Columbus and Stuyvesant are noteworthy historical figures, but their well-known transgressions no longer make their statues relevant or acceptable in the diverse world in which we now live. As a result, I am fully supportive of removing both statues to an appropriate ‘resting place’ as is currently being done in the South with confederate statues.” While we live in a society with monuments that reflect the past, we must focus our attention towards the present and be mindful of how these images affect most marginalized groups. If we desire to be truly progressive for future generations, we must get rid of the reminders of what afflicted us because you cannot heal in the same environment that got you sick.