The Quest For Water On Campus 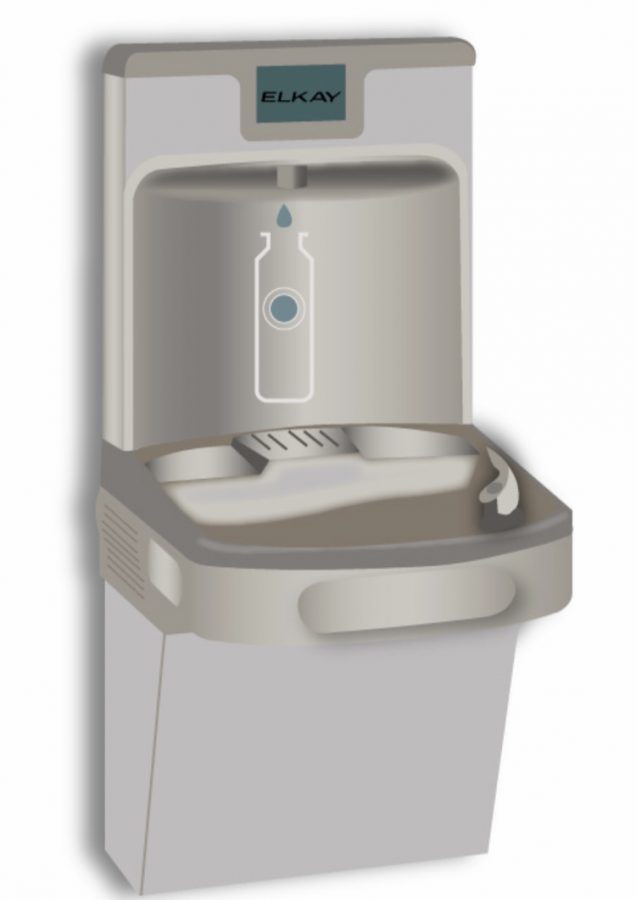 The ELKAY water systems that are found throughout the campus. Photo created by Aminah Chaudhry.

Between commuting, going from class to class, clubs and extracurricular activities, students can get thirsty very quickly. There are multiple places on campus where thirsty students can get water, e.g., Dunkin Donuts, the cafeteria, book store, and vending machines all sell water for various prices. However, it can be quite costly to constantly buy water bottles throughout the day.

Doctors recommend people drink eight 8-ounce glasses. To give you a perspective on how much that is: it is estimated to be about 2 liters, or half a gallon of water a day. So, people might have to buy 3-4 bottles of water daily when they’re on campus. This is where these water bottle refill stations come into play.

The idea for the stations was developed by President Sue Henderson.What do these filters do? Well, as Anthony Rago, Director of Facilities, explains, “the purpose of the filter is to screen out general impurities in the water and ‘polish’ water for a more palatable taste by tempering chlorine and turbidity.” These filters provide cleaner and safer water for all of our students by removing sand, silt, chloramines, and chlorine.The water bottle refill stations are not only convenient but also good for the environment.

Instead of using 3-5 plastic bottles a day, you could use one reusable bottle and simply refill it throughout the day. The main company behind the filtration systems is Elkay. The cost of one of these stations is about $1050.00, not including installation and piping. Rago has said that as of January 16, 2020, all the stations have been paid for by the university. So far these stations have been implemented in Vodra, Hepburn, Rossey, and Karnoutsos.

After that people were starting to wonder why they were not installed in the building where most students go to. Suddenly, a station appeared in the Gilligan Student Union building (GSUB) despite all the talk that they couldn’t and there wasn’t enough money in the budget. That leaves questions of “How?” and “Why?”.  I spoke to Anthony Rago “The plumbing behind the existing water fountain had to be completely removed, replaced and relocated to make it work with the fill station. The installation required unforeseen piping and electrical reworking,” according to Rago. Now that four buildings on campus have these stations, students can enjoy filtered water while saving the environment and saving money.

I personally haven’t paid for bottled water in months because of these stations.The next step is to have the refilling stations implemented in other NJCU dormitories like West Campus Village and Co-op. Since there is already one in Vodra, it only makes sense to have one in the other dorms as well for the students who spend the most time on campus since they should have access to convenient, filtered water in their dormitory.

These water filtration stations are great for the environment because it cuts down on plastic. It is also beneficial to the students on campus so they can save money on bottled water. Plastic is extremely damaging to the environment and every little step in using less plastic helps the environment