With more than 60 million Hispanics making up the largest minority population in the United States, one cannot ignore the influence their cultures have on our society. The contributions Hispanics have made both large and small are very significant, and have left a lasting impact on the United States. It is also very evident simply walking around the NJCU campus.

September 15th marks the beginning of Hispanic Heritage Month which runs through October 15th. This month-long celebration focuses on the richness and beauty of Hispanic cultures, as well as the history and contributions they have made to the United States. September 15th is a significant day for several Latin American countries; Costa Rica, El Salvador, Nicaragua, Guatemala, and Honduras all celebrate their national independence days on that date. Mexico celebrates on September 16th and Chile on September 18th. Due to the pandemic forcing many celebrations last year to be canceled or changed to virtual celebrations, this year’s festivities will be more meaningful now that people are able to gather in person and celebrate again.

NJCU, with its large Hispanic student body, has several events planned to commemorate Hispanic Heritage Month. This year’s events are being spearheaded by Professor David Blackmore and Dr. Angel Gonzalez. Blackmore is both an English Professor at NJCU and Co-director of the Center for Latin American, Caribbean, and Latinx Studies (LATI Center). He said that the mission of the LATI Center is “to promote the scholarly study of Latin America, the Caribbean and Latinx communities in a way that connects the university to the communities that surround it… the center helps make connections and build a strong network between teacher-scholars and the communities they serve.”

Gonzalez, the new Chief Diversity and Inclusion Officer at NJCU, plays an important role in our Hispanic community. Sue Henderson, NJCU’s President, explains that “The Chief Diversity and Inclusion Officer is a critical addition to the university’s senior leadership team and will provide transformative leadership to advance equity, diversity, and inclusion as part of NJCU’s core mission.”

Venida Rodman-Jenkins, director of the Speicher-Rubin Women’s Center for Equity and Diversity at NJCU, added that this year her program would also be celebrating by “sponsoring one program for Hispanic Heritage Month which intersects with LGBTQ history month. It will feature a talk by a Georgian Court University professor who has written a book on sexuality that is non-normative.”

An opening ceremony on Wednesday, September 22nd will kick off the planned events at the university. The LATI Center has partnered up with the Council on Hispanic Affairs (CHA) and CLE to create different events throughout the university.

CHA is made up of students, faculty, and staff whose “primary goal is to increase the awareness of and appreciation for the contributions of Latin American cultures and traditions.” This year CHA will be shining a spotlight on Hispanic staff members and their contributions to NJCU.

Throughout the month, the following events will be taking place on campus:

Karnoutsos Entryway – Join the opening ceremony celebrating Hispanic Heritage Month. The event will feature a keynote address from attorney and activist and soldier Cesar Vargas. With a live performance from NJCU’s own Latin Jazz Band and remarks from the Council of Hispanic Affairs and more. Lunch will be served. Sponsored by Council on Hispanic Affairs, Center for Leadership & Engagement, Office of the Chief Diversity and Inclusion Officer.

GSUB Room 129 Join an interactive conversation about Gonzalez’s new role as the Inaugural Chief Diversity and Inclusion Officer as well as some conversation about his career, background, and more. Sponsored by the Center for Leadership & Engagement.

The Racism of Imperialism: Latin American Natives through European Eyes: 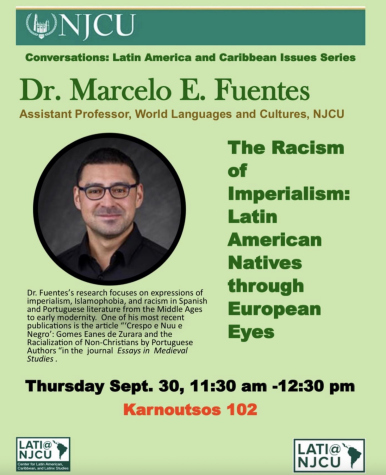 NJCU’s own Chef RoQu will celebrate Hispanic Heritage Month with a cooking demo of a selected cultural dish. Sponsored by the Center for Community Engagement and The Community Center.

The Center for Leadership and Engagement will sponsor two students to attend the Latinx Leads Student Leadership Conference, the largest national gathering of Latinx student leaders and campus-based advisors to address the most critical topics of diversity and social justice challenging our Latinx community within colleges and universities. Virtual Conference – Latinx Leads

Sponsored by the Center for Leadership and Engagement.

Panel Discussion featuring Cristian Vergara, NJCU alum and current Director of the Student Navigation office at Rider University; Albert Hernandez, NJCU alum and author of the book 15 Consejos: A Guide for Latinx Students to Succeed in College; Jodi Bailey, Interim Vice President for Student Affairs at NJCU; and Yalile Suriel, a Ph.D. student at Stony Brook University and future assistant professor at the University of Minnesota. Sponsored by the Center for Latin American, Caribbean, and Latinx Studies.