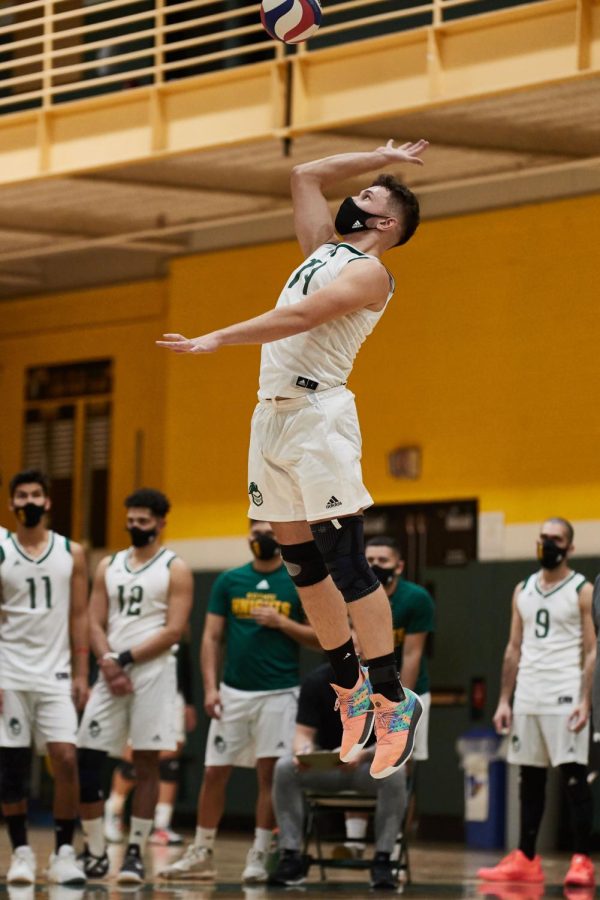 Following a win at the Skyline Conference and a bid to the NCAA Division III championships last April, the NJCU men’s volleyball team are training even harder to defend their title and advance further.

This season, the team’s roster has 11 returning players, four of which are seniors. There are also seven new team members, three of which are first year players.

Coach Patrick John Padilla is the newest addition to the team and was hired for his strength and conditioning expertise. Now that he is here during the preseason, he is able to extend the training and physical regimen.

James Bajor, one of the team’s co-captains, was vigilant about the opponents they would be facing. Bajor said, “There’s going to be a lot of teams that are out for us looking for blood, I think St. Joseph’s College of Long Island is going out for us because we beat them in last year’s finals.”

St. Joseph’s College, considered one of the toughest men’s volleyball teams, won the past two Skyline conferences and beat NJCU during their regular season. However, NJCU eventually took their Skyline title away by dominating them after five sets 18-16.

The Skyline Conference is an intercollegiate athletic league where eight teams compete against each other. The men’s volleyball team winning the skyline conference was historic because this was the first time an NJCU team won a conference championship of any kind, and the first time the men’s volleyball team got a bid to play in the NCAA Division III championships. This is the first reputable win volleyball has had since 2010 and it gives the Gothic Knights much-needed recognition on a national stage.

Richard Valentine, who was honored with the libero of the week during the skyline conference for getting eight digs, talked about how he felt about winning last season. Valentine said, “Our head coach has waited many years for a chance to redo on winning a conference and I’m happy our team was able to make him proud. Winning the game has presented new opportunities to enter the NCAA and compete against the 12 best teams in the country for Division III volleyball.”

Back in 2010, the team lost a conference 16-18 in the fifth set. Head Coach Carlo Edra considered it the worst loss of his entire career but that did not deter him, in fact, he put the runner-up trophy

Even though they were able to make it to the NCAA Division III championships last season, the team lost by seven points during the first round against Wentworth Institute of Technology. A loss that Coach Carlo attributes to the team’s nerves due to the sheer size of the event. This season, the team hopes to make more progress.

Last year’s captain Alexander Umanzor gave advice to the newcomers on the team and said they shouldn’t take anything for granted: “They need to work hard and give it their best. Hard work will be evaluated by Coach Edra.” He finished off by saying, “Always trust the system.”

“Trust the system” is a phrase used by Coach Edra; it refers to blockers and defenders positioned in the back row. When asked to elaborate on the meaning of it, Edra explained, “The players are set up so when the opposing team hits the ball to certain areas of the court and that’s where our defenders are.”

The pandemic shortened the season last year to 16 games but this season the schedule is back to 28 games. Their first home game is a tri-match and is scheduled to be on January 27th against Lehman College.