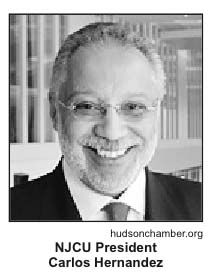 [Editor’s Note: NJCU President Carlos Hernandez announced his retirement last month as the Gothic Times was going to press. We will continue to monitor this story, exploring the president’s legacy and reporting on the process of choosing his successor. Reprinted below is the official release from the university announcing the president’s retirement.]

Dr. Carlos Hernández, an environmental psychologist with extensive public service experience in higher education, will resign from the presidency of New Jersey City University (NJCU) at the close of the academic year. His retirement will be effective July 1, 2012.

President Hernández, the institution’s eleventh leader in its 82-year history, became president in 1993. Prior to his appointment as president, Dr. Hernández served in various capacities at NJCU: as provost, vice president for academic affairs, executive assistant to the president, and a faculty member in the Department of Psychology.

During his tenure as president, the institution attained University status on May 29, 1998 and changed its name from Jersey City State College to NJCU. Under Dr. Hernández’ leadership in 2000 and 2010, the institution underwent two successful reaccreditation processes by the Middle States Commission on Higher Education.

In announcing Dr. Hernández’ decision to step down from the presidency yesterday, Chair of the NJCU Board of Trustees Rafael Perez said, “As president for the past 18 ½ years, Dr. Hernandez has provided leadership of the highest caliber. He is a respected leader who has served with distinction at NJCU and made many contributions to this University. President Hernández has represented this institution extremely well in our community, in Trenton, and on many boards on local, state, and national levels.”

Dr. Hernández commented in his message to the University community, “During my term as president I have tried to serve to the best of my ability to lead us toward realization of our very important mission… The coming calendar year will mark my 39th year here and 19 of those have been as president; they have been intellectually stimulating and personally and professionally rewarding… You have been supportive, collegial, and collaborative throughout these years. Soon, someone new will carry forward the mission and carry the narrative into the future.”

During Dr. Hernández’ presidency, the span of academic offerings increased as the University diversified its programs and expanded to include three colleges: the William J. Maxwell College of Arts and Sciences, the College of Professional Studies, and the Deborah Cannon Partridge Wolfe College of Education.

The number and selection of academic degree programs also grew significantly to include numerous graduate-level programs, among them two doctoral programs that will be offered in the 2012 academic year. Dr. Hernández advocated through the years for the internationalization of NJCU’s curriculum, for foreign-language proficiency for all graduates, and for study abroad experiences that would broaden knowledge and give graduates a competitive edge in the global market.

NJCU’s tradition of access and excellence has remained unchanged throughout President Hernández’ term. Diversity and the University’s urban mission have been defining elements of his work.

Through the years, Dr. Hernández advanced an institutional agenda that was bolstered by cutting-edge technology and first-rate facilities in order to promote a forward-looking university. He envisioned an urban center of excellence where students would learn to think, communicate, and become responsible global citizens.

The University’s physical presence has changed significantly during Dr. Hernández’ tenure. A major facilities master plan was launched. It included the construction of three academic buildings (George Karnoutsos Hall, the Media Arts Center, and the Visual Arts Building), the state-of-the-arts John J. Moore Athletics and Fitness Center, and the complete redesign and renovation of the Congressman Frank J. Guarini Library and the Michael B. Gilligan Student Union. NJCU purchased land that will eventually lead to doubling the footprint of the campus.

Dr. Hernández has been the driving force that joined with the City of Jersey City and several partners in the community to begin a sweeping redevelopment project – the Bayside Project – that is changing the west side of Jersey City.