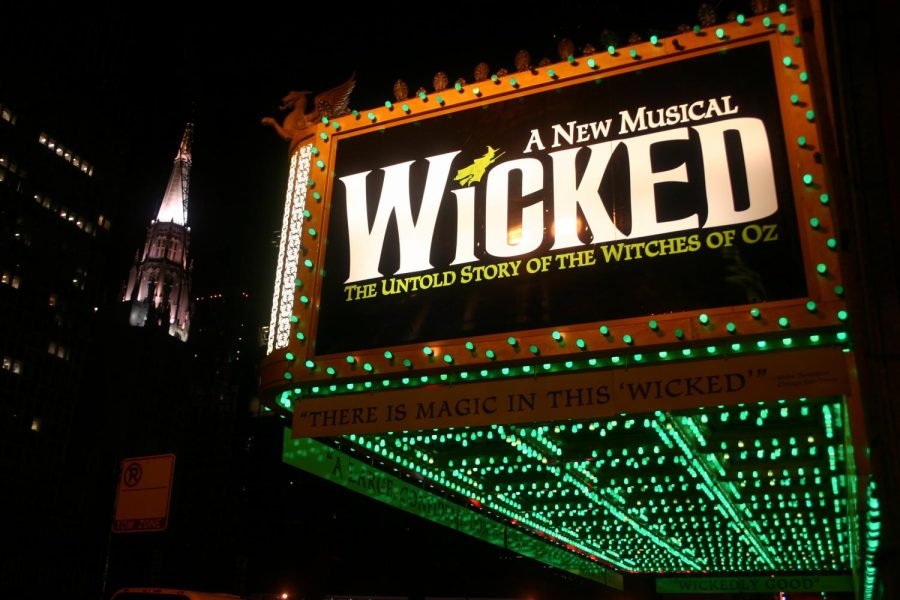 “Wicked”—a fitting name for the Broadway show I went to see this spring. The protagonist is draped in a melancholy black lace dress, a black hat and a matching cape set off by skin as green as the Emerald City itself.

This musical is filled with brilliant hues (amid the black) and all of the costumes were vibrant and fit the enchanting setting of Oz.  Overall the production values were spectacular. The music elevated me and helped me empathize with the characters and become well acquainted with the world they inhabited. A perfect blend of flute, violin, piccolo and clarinet overtook my senses. This served to heighten the sense that the audience was thrust into a land of fantasy.

The story is narrated by Glinda the Good and set from the perspective of Elphaba the Wicked Witch of the West while being told in a flashback. Elphaba, who was conceived out of wedlock, was born with a facial deformity and green skin that marks her entire life. Everywhere she goes throughout her childhood and her years in college she is cast out and shunned by others. It didn’t matter that she had a good heart or that she had an innate talent for magic. No one ever got to know that side of her; all that mattered was that she was different. She is subjected to isolation and ultimately rejection from society.

Jennifer DiNoia depicted an accurate representation of Elphaba and her emotions, which are in constant turmoil since she is denounced at every turn. It’s not until Elphaba attends university that she makes her first friend: Glinda the Good. At first what seems like an unlikely friendship becomes an unbreakable bond. Glinda’s bubbly nature was really showcased well when Kara Lindsay sang her song “Popular.”

Lori Ann Ferreri played Nessarose, Elphaba’s disabled sister. She does a fantastic job of showcasing the disapproval she harbors towards her sister. Nessarose is angry at having to depend on her sister for everything and cannot understand why her sister will not just simply heal her feet so that she may walk again. Once she is able to walk again, she becomes an unmerciful ruler, and thus the Wicked Witch is born and along with it, one of the most memorable songs of the play, “The Wicked Witch of the East.” Through this song she also expresses her unrequited love and her anger.

“Defying Gravity,” the most popular show tune that perhaps defines “Wicked” brought me to new heights and was a delight to hear. DiNoia really shined her brightest with this piece. It is perhaps what “Let it Go” is to the Disney movie “Frozen.” An empowering song, DiNoia really delivers with high notes, and flashy effects that elevate her while she is on a broomstick looking down on naysayers and those that are adamant about opposing her when she defies working with the enemy. “No One Mourns the Wicked” is another wonderful piece sang by the town folk of Oz. Finally,“No Good Deed Goes Unpunished” marks the death of Elphaba and the birth of the Wicked Witch of the West. Everything that can go wrong has gone wrong and everyone that Elphaba has ever held dear is dead or presumed to be dead. The audience can feel the despair as DiNoia pours her heart into this song. It is left me with goosebumps and it is one of the most memorable live performances I have heard. Overall, this is a show every musical lover should experience at least once in their lifetime.

Now that I’ve shared my experience some of you might be wondering, where can I buy these tickets? Broadway is expensive and I can be just as frugal as the next person. Ticketmaster and StubHub are two of the best resources.

I have used Ticketmaster to set alerts so that I am emailed about shows that might interest me. They also inform you if the cost has reduced for certain shows. I managed to snag great orchestra seats for “Wicked” for about $120 dollars at the Gershwin Theatre in Manhattan. It was well worth every cent.

For those musical lovers that just can’t get enough, I also recommend the Broadway show “Kinky Boots.” Head to ticketmaster.com, create an account, click on the account drop down menu on the right hand side at the top and click on update favorites. Type in the show title of your choice and add to favorites. This will enable you to receive alerts via e-mail.