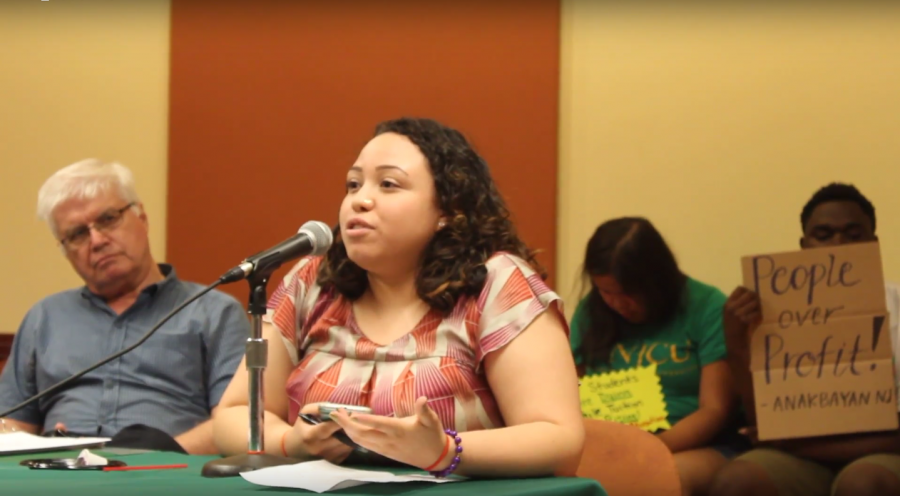 STUDENTS SPEAK OUT: Beatriz Villatoro speaking at the Board of Trustees meeting regarding an increase in tuition over the summer. Courtesy of Ruthie Arroyo.

NJCU’s tuition has increased by 2.9 percent for this academic year. The Board of Trustees voted on the increase during a meeting held this summer. Several students on campus including group members from the Take Back Our Education coalition (which included PEP, the Undoing Racism Committee, AnakBayan NJ, and Dreamers) attended the meeting to voice their concerns about the proposed hike.

“We can see that increasing tuition does not improve the quality of education because colleges and universities like NJCU only see students as profit-makers, instead of citizens that are striving to get the education they need and deserve,” said Shaira Cruz, a senior majoring in history. Beatriz Villatoro, a 2015 graduate, told the board that when she was an undergrad the yearly tuition increases forced her to take out more loans and she had to drop being a full-time student to become part-time so she could work and help pay the rising tuition prices.

Aside from tuition being raised yearly, students said education has become a business. They complained that many professors are being laid off, there are not enough scholarships and staff are being replaced by automated systems, such as the parking booth attendants (which students have said caused an inconvenience when the machines malfunction and there are no staff in the vicinity to accommodate anyone trying to leave or enter the parking lot.)

Rukiya Bluford, a graduate student and member of the Undoing Racism Committee and PEP said that, “If you continue to raise tuition, you continue to make the statement that our lives are for sale.”

Professor and President of the local union American Federation for Teachers, Bill Calathes, spoke up in support of the students, telling the Board, “A 3 percent increase may not sound like much but it’s a lot.”

The board responded by assuring the students that their words did not fall on deaf ears and that they would consider freezing the tuition. Students exited the room as the meeting concluded chanting: “Money for jobs and education, not for wars and occupation!”

Jodi Bailey, the Executive Director for Housing & Residence Life went on to say that that students will be able to have more freedom in choosing their roommates, more gender-inclusive housing, and students will also be hired more on campus.

This story was originally printed in The Gothic Times, Issue 1 of Fall 2017.