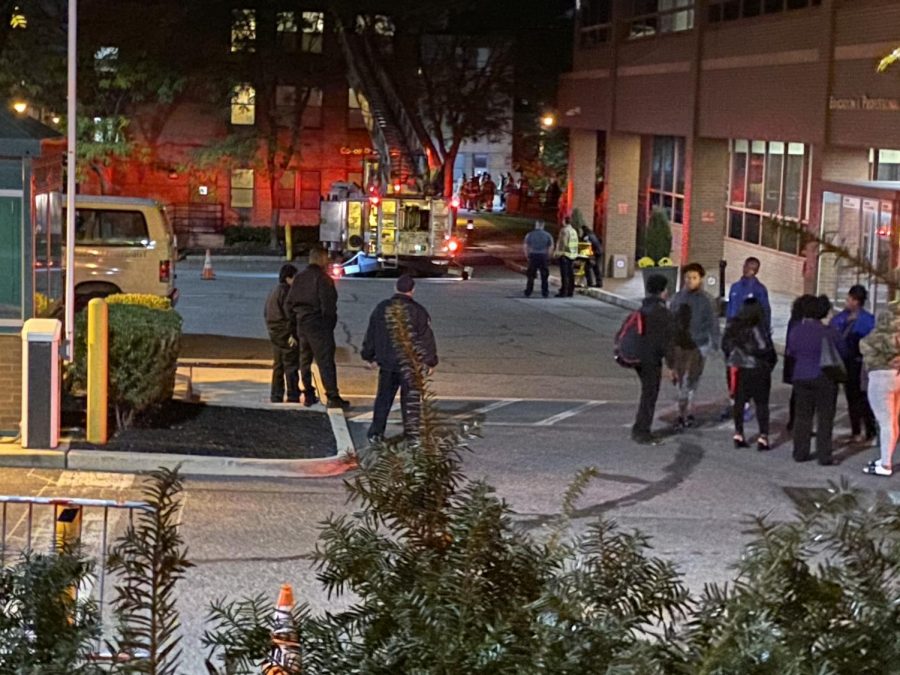 Students were forced to evacuate Friday night after a fire broke out at the Co-Op Residence Hall.  There were no reported injuries.

A report from the Jersey City Fire Department (JCFD) said the alarm came at 8:08 p.m. and the fire trucks arrived on the scene at 8:12 p.m. The incident report states the fire occurred on the third floor.

“We’ve checked every single room,” Luciano said. “There are some rooms that have a lot of water damage in them. Right now the entire building is wet, so the hallways are wet on every single floor. I was walking through it. I almost slipped a few times. So I just need to make sure it gets a little dry before we let you back in. Some of the ceiling is coming down a little bit, just from all the water in the building.”

Erika Perez, a Creative Writing major, said she was walking out of the building when she was told there was a fire. “One of the [Resident Assistants] was on the phone. She said that it was not a drill and it’s a real fire. Then I looked up and I see the fire. I’m still not sure what actually happened.”

Perez said that the students were allowed back to their rooms due to it being safe. “We went back to the dorms and slept afterwards. Some students whose rooms were affected were relocated but I don’t know where to.”

Sherrie Madia, associate vice president for Marketing and Communications at NJCU, said students were moved to other residence halls. She said:“Students were relocated to other university housing.”

Jodi Bailey, associate vice president for Student Affairs, said not a lot of students were moved.

“A small number of residents were relocated, under 10.”

Firefighter Lazlo of the JCFD said the fire’s origin is still under investigation. He said: “Additional details of the fire and its origin should be available by the end of the week.”

A statement from NJCU Communications stated the dorm is being repaired: “Students are expected to return to the residence hall within the next few days…Remediation to [the] building is currently taking place.”

Perez said that the Residence Life staff were very helpful with the students after the fire.

“They updated us about what was going on whenever they had a chance,” she said. “Knowing that the fire didn’t spread to other rooms was a relief for me and the rest of us. Although when they told us that the water was leaking through the rooms I was very scared because all I can think about was my laptop. Overall the staff did an amazing job because they made sure that there was nothing to worry about and everyone was calmed. They also provided food.”