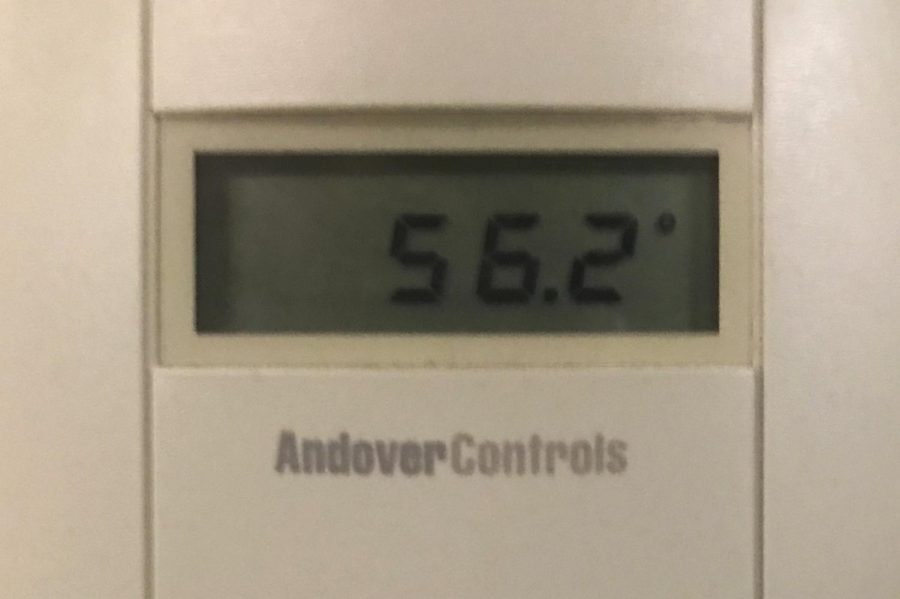 Professors had to teach in classrooms with hats, coats, scarves, and gloves. One professor in Fries was reported visibly shaking while teaching. Some classes were canceled and even moved to different classrooms but it still did not make a difference. A student who takes classes in Fries said: “You could freeze meat in here.” Other students reported that tutoring sessions were also moved to hallways because the rooms seemed cold.

“It’s something you’re constantly thinking about instead of your professor teaching,” Torres said. “It’s been two weeks and every day it’s getting colder and colder.”

Dr. Ann Wallace, professor in the English department, said that the temperature conditions in Karnoutsos, made her ill.

“Part of the problem for me is that I have a condition, Multiple Sclerosis . One of its impacts is an extreme sensitivity to cold. On Tuesday I walked into a classroom with a 53 degree temperature. I suffered a migraine, my body temperature throughout the week stayed within 96-97 degrees, and I am lucky to have caught and dealt with the Strep throat that came on which left me on bed rest for the weekend.”

However, some report heating and cooling issues have been ongoing.

Michael Rotenberg-Schwartz, English professor, who works in the Karnoutsos Hall said: “This morning I walked into my office and the thermostat said 57. That’s not so uncommon: last June 19, I walked in to 54.4. But worst was January 22, when the thermostat read 39 degrees. 39.”

The Gothic Times, located on the third floor of the Gilligan Student Union building, also has issues with their office being cold: one day it was reported that it was 62 degrees.

Sherrie Madia, associate vice president for Marketing and Communications at NJCU, said there was no heat since November 14 and made sure staff and faculty were informed.

Andre Pearson, associate vice president of building services, said that there was a problem with the equipment and although a replacement part was ordered, it didn’t come as quickly as he expected.

“ The cold condition is due to the failure piece of equipment. This occurred several weeks ago and the replacement equipment was ordered back then to prevent getting into this situation.

However, there was a 6 week lead-time for manufacturing. The replacement equipment finally arrived on campus last Thursday, a few days later than scheduled, and installation began last Friday… but the delay in equipment delivery has pushed it back to Wednesday,” Pearson said.