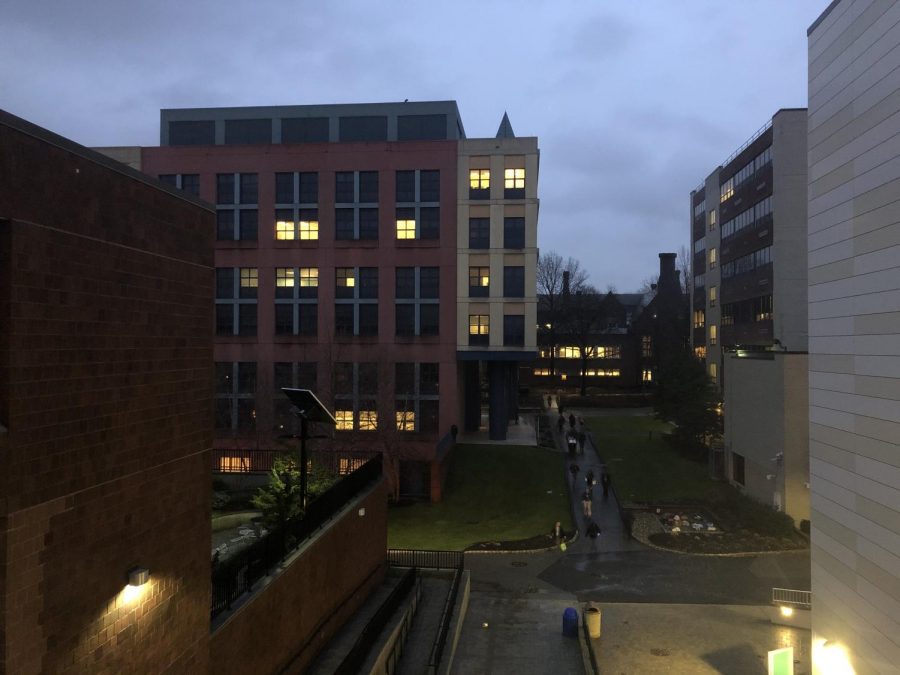 Lights slowly come back on across campus as the lockdown was lifted.

Yesterday on December 10, a violent shooting happened on MLK Boulevard and Bidwell Avenue, as well as the surrounding area, not far from NJCU’s main campus. Two gunmen, who had only been identified as a man and a woman garbed in black clothing and carrying powerful weapons, exited a stolen U Haul truck and began opening fire. So far law enforcement states that the suspects were David Anderson and Francine Graham. The stolen truck reportedly also contained a live pipe bomb and a manifesto written by Anderson.

The shooters took shelter in a nearby kosher deli after firing at an officer in Bayview, which police suspect was a targeted attack. The gunmen fired at anyone or anything, including the nearby Sacred Heart Catholic School. Soon police from Jersey City, Bayonne, Montclair, New York City, and even FBI and ATF agents gathered at the scene. Shots were first fired around 12:30PM and continued for an hour.

Six people have died as a result of the shooting, including a police officer, the suspects, and three civilians. Three more police officers and a civilian had been injured, but none in critical condition. The officer has been identified as Detective Joseph Seals, a 40 year old father of five, who had been killed when he attempted to confront the gunmen. The slain civilians have been identified by community members as Mindel Ferencz, who ran the store with her student, Miguel Douglas Rodriguez, an employee of the shop who had immigrated from Ecuador in 2017, and Moshe Deutch, a rabbinical student who lived in Brooklyn.

Mayor Steven Fulop and NYC mayor Bill De Blasio believe this was a targeted Anti-Semetic attack on Greenville’s growing Orthodox Jewish community, as the identified civilian casualties were both Orthodox Jews. The gunmen are suspected of being affiliated to the Black Hebrew Israelite movement, which has been labelled a hate group by the Southern Poverty Law Center (The movement is not connected with Judaism). While ties are suspected with Anderson, none have been found between Graham, the female shooter. The Black Hebrew Israelites have not had histories of violentThe rise of Anti-Semitic shootings across the country are beginning to raise fears amongst Jewish communities.

Many theories arose in the earliest parts of the incident as a botched drug deal or a failed undercover sting, but it appears that the assault was premeditated by Anderson and Graham. Neighbors stated that Graham was initially a very pleasant person to talk to, but had changed once she started spending time with Anderson, who many said was harsh and would often ramble aloud against religions he deemed false.

NJCU and every public school in Jersey City went into lockdown. I myself was waiting for a Lyft ride home and was confused as to why my driver kept going the wrong way. The driver called me and told me there was no way to get to me because every corner was blocked off. I crossed the street to see why, and saw Audubon flooded with cop cars, and a Sheriff’s car on Culver. I checked Facebook and got wind of the shooting. I decided it was safer inside and waited in Hepburn Hall. My mom called and asked where I was and if I wanted a ride home. I took the offer because I didn’t want to feel like a sitting duck. The main campus locked down as I stepped out, and walked for my dad’s car. As I walked, I heard what sounded like shotgun fire and ran. I couldn’t see if it was police or the gunmen, and I didn’t care to find out. I got home safe but shaken.

But I was fortunate to be close enough to not get caught in the lockdown. Many students, burned out from finals and just waiting for the holidays, were forced to remain on campus until the clear was given. After several hours, the lift was finally cleared, and luckily no one on campus had been harmed or in danger. But an event like this is terrifying, especially when you can’t go home.

At around 5PM the lockdowns were lifted and families could be reunited, though many in the area couldn’t go home because of the investigation. This was a terrifying moment in our history, and we can only hope that something like this doesn’t happen again. I urge everyone in the area to be safe and vigilant. Jersey City’s strength lies in the diversity of its citizens. Hate crimes that seek to harm and divide have no place here.